I got to work this morning and promptly proceeded to lock my keys in the car. What kills me is that I couldn’t find my car keys yesterday so I grabbed my spare set  knowing the other ones would turn up. Well this morning they did turn up. As I was locking the house on the way to work I threw my keys into my computer bag and immediately noticed the other set of keys was inside. I immediately thought, “Oh crap, Rule Number 1, never keep your primary and spare keys in the same place”. Well, lazy me, I reasoned no way today’s the day I do something stupid.

Well, guess what? Sure as Sunday I locked my computer bag in my car. It’s so hard to lock your keys in the car these days. Cars are a lot smarter than they used to be. You really have to work at it. And work at it I did. OK...what do you do when you’ve locked both sets of keys, your wallet, and your cell phone all in your car? I stood around for 30 minutes waiting for the security police to drive by and help me out. No such luck...they must be busy on a Monday morning. Well, as it turns out, I thought I locked my badges in the car as well, but I had them in my pocket. OK, at least I can go into work and sit at my computer and try to figure this all out.

So in I go. I called the security police immediately. I asked them if they carry “Slim Jims” in their vehicles. Nope, came their reply, too much liability for us. I think he was lying. I’m pretty sure “Slim Jims” are standard issue, in case a cop finds a child or a dog locked in a hot car. But maybe not. Anyhow, the officer on the other end of the phone gave me the number for Al’s Towing. They would be able to open my car, but it would cost me $80 bucks. Well...at least I knew what the minimum damage would be. I wonder if those guys research how much it would cost to replace a driver’s side window? Aside from the time and the mess that the broken glass would make, at least the window on my car goes for about $84 bucks. That’s way too close to be a coincidence. I wasn’t ready to drop the coin yet. I figured, surely, someone at the office, one of the car enthusiasts I knew, must carry a “Slim Jim” in their tool kit. I called around. No such luck. One guy was like, yeah, I’ve been meaning to get one but I just haven’t. Then I did a search on Slim Jims, just to see what one actually costs. So starts my lesson for the day.

If you haven’t seen the movie “Gone in 60 Seconds” starring Nicholas Cage and Angelina Jolie, I have to point out that a Slim Jim is not the beef jerky that comes as a snack meat stick wrapped in plastic...well, yes, those are Slim Jim’s too, but those are not the ones favored by car thieves. The ones car thieves used are long slender pieces of metal that they use to slide into a car door to pop the lock...that’s not called Jimmying a lock, but I’m not sure why. Jimmying a lock requires the use of a crow bar. I’m not sure why everything surrounding B&E or grand theft auto is referred to with my name...but that’s another story altogether. Any way, I’m not sure it’s even legal to own a Slim Jim in Virginia. Doesn’t matter, I couldn’t find one on short notice. So I started to search the web. (I just looked it up and it turns out that possession of a Slim Jim in Virginia could be used as evidence of criminal intent) A couple of the websites I visited were blocked by the office. Was that because the Slim Jim appeared on a “shady website”? I don’t know, but at least a number of tools came up for sale. A basic model sells for about $19.99. But then you can buy an entire kit, at least six different shapes and sizes for around $100 bucks. No thank you, I just need one working Slim Jim. Then I got a hit on a website that intrigued me. It was a do it yourself video on how to fabricate a Slim Jim. Really, are they that easy to make?  I pulled up the page and looked at some of the pictures describing what they were talking about.

A Slim Jim is really just a long thin piece of spring steel with a notch cut at one end and a handle at the other. If I could find a long thin piece of steel or plastic at the office, I thought, I might be in business. But how would I cut the notch? I figure if I found the steel first, I could figure out how to cut the notch. The DIY website said it was possible to open a car, between the door and the window, with a coat hanger, but generally speaking it was too hard to control. The spring steel is the right way to do it. So I dismissed the coat hanger idea and went in search of office spring steel. Anybody know where to find spring steel in the office? Well, here is the secret, and I bet you have a Slim Jim sitting in your desk right beside you. Everyone of the green Pendaflex hanging folders in your desk drawer have two pieces of spring steel in the top of them. They are what makes the hanging folder able to hang. I immediately ripped one out of the standard 8 ½ by 11 hanging folder and judged the 12 inch length to be too short. But what about a legal sized hanging folder? It took another 60 seconds before I located a stash of the longer folders. 14 inches still looked short, but with my small car, maybe it was sufficient. When I had the longer piece separated from the folder I stared at the notch that has already been cut into the spring steel. It’s already there. No need to do more. Maybe some tape around the opposite end to use as a handle. I was in business.

First I called the security police and told them I’d be out trying to break into my car. They didn’t seem too concerned. Then I grabbed a friend (not Angelina) and immediately went out to my car to give it a try. I wanted a witness there in case the cops decided I was trying to break into a car. Of course that’s exactly what I was trying to do. But the witness, could at least back up my story. So I inserted the slender device between the glass and the rubber seal on the door side and slide it into the interior of the door. I could move it easily and felt around for what might be the linkages for the door lock. I couldn’t feel anything. I immediately I determined that even 14 inches was too short in this case.

But also knowing there is just about an unlimited supply of hanging folders back in the office I went back to see if I could lengthen my common office supply Slim Jim by connecting two of them together. This turned out to be very easy. I overlaid them about three inches and taped them together with masking tape. I didn’t even seek out the high durability and multi-purpose duct tape. Then I wrapped masking tape around the handle until it made a nice size ball that was easy to hold on to. I grabbed my friend who was doing a few web searches on my car door to find a schematic and we headed back to the parking lot. He said the schematic shows the rod we are looking for is pretty much right below the door lock so he located the point on the car door we were looking for and I placed the longer Slim Jim between the glass and the door and pushed in down. Oh, yeah, based on the schematic I bent the spring steel a little toward the inside of the car and kept the hook towards the back of the car. I poked around for about five seconds and my friend said right there, he could see the door lock jiggling. So I moved the Slim Jim back to that area and moved it back and forth until he saw the lock jiggle again. When he said it was jiggling I pulled up on the Slim Jim. I pulled up with very little force… The lock popped right open...as light as a feather. And I was in. 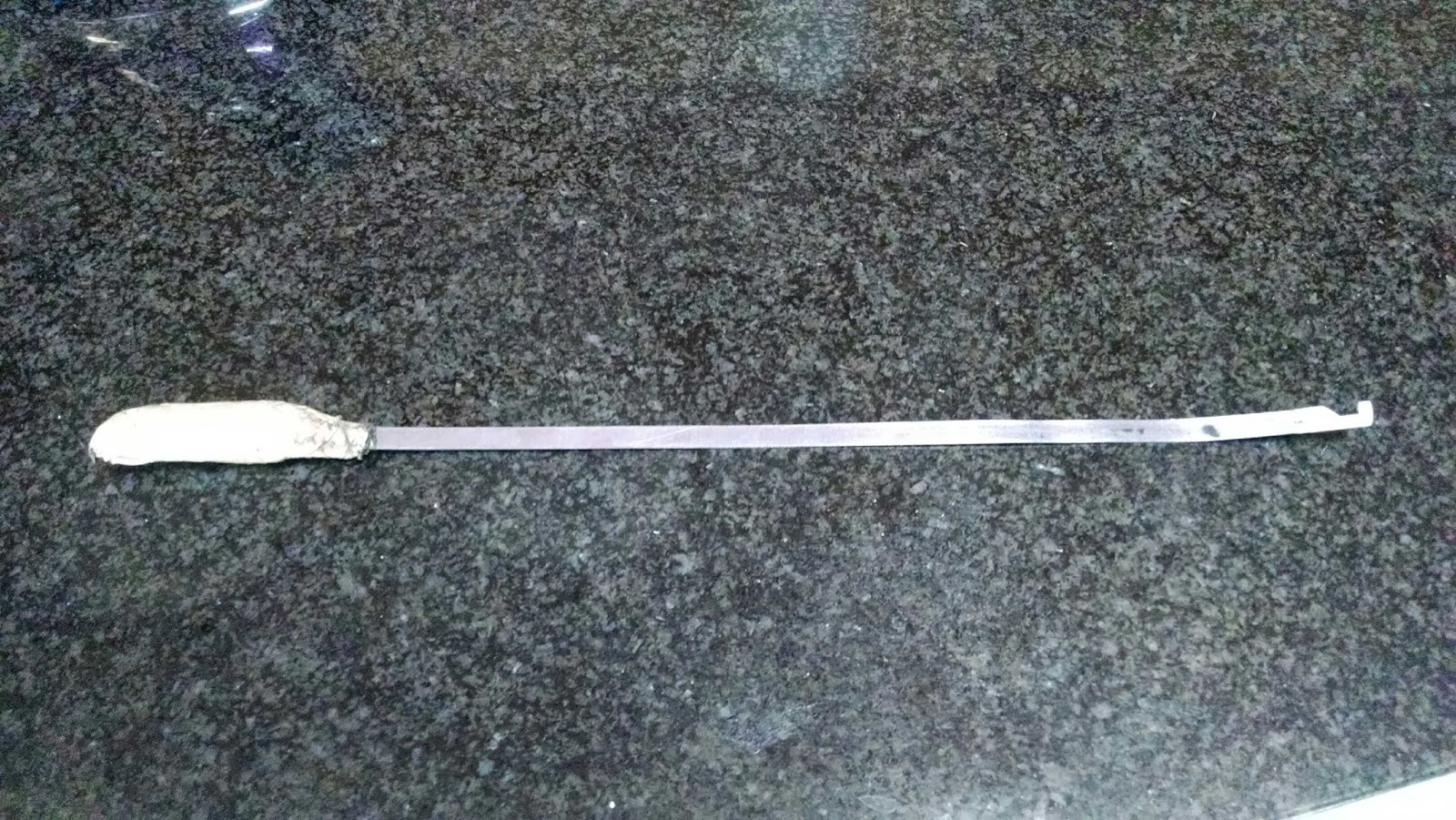 The whole break-in took less than a minute. I’m fairly certain that with a little knowledge and a good Slim Jim, entering the car is the easy part. So let’s say 10 seconds. To be gone in 60 seconds, you would also have to hot wire it. Maybe that’s for another time. But for now, here is a picture of my homemade Slim Jim...which is no longer in my possession....if you just happen to be in Virginia law enforcement and are reading this blog.  But just remember, who doesn't have about 100 Pendaflex folders and a roll of masking tape at their desk?

Can't say I made it in 60 seconds, but I was able to hot wire my truck from scratch in about 2 minutes...I'd guess I could do it in 50 seconds next time. Of course, it's a 1951, so there are only three wires running into the ignition, which is exposed under the dash, so it's pretty simple.

But next time, I'll remember to connect the alternator as well as the ignition coil so it will not only run, but also charge the battery. Going bingo electricity in the middle of the night during a lower Alabama thunderstorm is not on my list of things to do again...

Mooch
And so we beat on, boats against the current, borne back ceaselessly into the past...(FSF)

Buy Books I Recommended on Amazon.com

What Would Google Do?

The Girl with the Dragon Tattoo

The Revolution: A Manifesto

Are Your Lights On?

Shoot an Iraqi: Art, Life and Resistance Under the Gun

Why We Make Mistakes

Passion of Command: The Moral Imperative of Leadership

The Swerve: How the World Became Modern